While investigating, Woodward and Bernstein had a critical source, Deep Throat. “Woodward had a source in the Executive Branch who had access to information at the CRP as well as at the White House. His identity was unknown to anyone else. He could be contacted only on very important occasions. Woodward had promised he would never identify him or his position to anyone. Further, he had agreed never to quote the man, even as an anonymous source. Their discussions would be only to confirm information that had been obtained elsewhere and to add some perspective. In newspaper terminology, this meant the discussions were on ‘deep background.’...[Howard] Simons dubbed him ‘Deep Throat’...The name stuck.” [1] 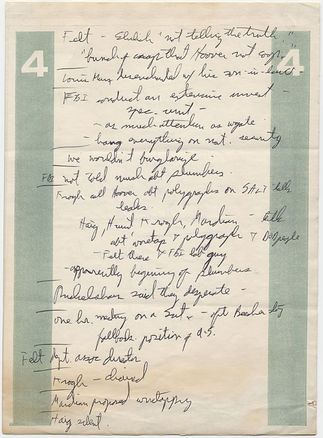 July 1973 - Woodward's notes from phone call with Mark Felt [4]
​Felt’s identity as Deep throat was confirmed 30 years later in a Vanity Fair article in 2005, “Despite three decades of intense speculation, the identity of ‘Deep Throat’—the source who leaked key details of Nixon's Watergate cover-up to Washington Post reporters Bob Woodward and Carl Bernstein—has never been revealed. Now, at age 91, W. Mark Felt, number two at the F.B.I. in the early 70s, is finally admitting to that historic, anonymous role.” [2] Felt’s initial agreement to give information came after being denied the job of director, which Nixon had given to an FBI outsider instead. [3] 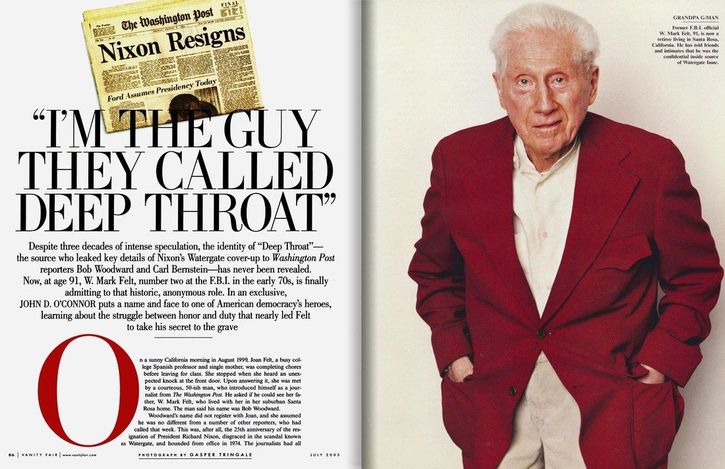