Truth:
The accuracy Bernstein and Woodward had while proving that a third-rate burglary at the Watergate was part of a more elaborate plan reveals their determination to expose the truth.

"You know, Bob said right after Watergate, that really, what this story was about, like all reporting, or good reporting, is the best obtainable version of the truth. " - Carl Bernstein [3]

"June 17, 1972. I had worked for the Post for nine months. They had this — it looked like a local burglary at the Democratic Headquarters, a police story. I covered the night police beat. It was a Saturday morning, I think the summer. Editors looked around and thought, 'Who could we call in? Who would be dumb enough to work on this story on a Saturday morning?' And they thought of me immediately. So I went to work with about seven or eight other people, including Carl (Bernstein), and I went to the arraignment of the five burglars, and the judge wanted to know where one of them worked, and he was mumbling. He wouldn’t say. Kind of going, 'CIA.' And the judge said, 'Where?' And he went, 'CIA.' And the judge said, 'Speak up. Where do you work? Where did you work?' And he went, 'CIA, Central Intelligence Agency.' And I know my reaction was one of 'Oh! This is not your average burglary.'" - Bob Woodward [4]

Empiricism:
Even though information that Woodward and Bernstein collected started off mostly as rumors, they were diligent in getting credible sources through interviews with campaign and government aides who had heard denouncing conversations or seen critical evidence. Even though they couldn’t access the physical primary sources, their hard work proves their commitment to empiricism. 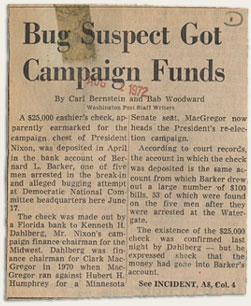 August 1 1972 - Bernstein and Woodward's Washington Post article about the discovery that a check from Kenneth Dalhberg has been given to one of the Watergate burglars. [5]
Verification:
Verification might be the most impressive part of the investigation. “An unwritten rule was evolving: unless two sources confirmed a charge involving activity likely to be considered criminal, the specific allegation was not used in the paper.” [6] Although the journalists were confident with sources such as Felt, the Post’s entire reputation was at risk if even one fact was incorrect. In fact, the only instance Woodward and Bernstein had an error was when they stated that  “a witness had given testimony to a grand jury about White House Chief of Staff H.R. Haldeman,” when in fact “It had never come before the grand jury.” [7]  ​​
Ben Bradlee on Woodward and Bernstein's mistake [8]
In response, the White House, Vice President, and the New York Times severely criticized and penalized the Post. To some, anonymous sources makes an article less credible, however in Woodward’s and Bernstein’s case, they had no choice. Many government officials and other sources put their careers, safety and reputation on the line in order to give information to the Post.

Impartiality:
The Post’s refrain in responding to harsh White House criticism proves their dedication to being unbiased.

"Time will judge between Clark MacGregor's press release and the Washington Post's reporting of the various activities of CRP. For now it is enough to say that not a single fact contained in the investigative reporting by this newspaper about these activities has been successfully challenged. MacGregor and other high administration officials have called these stories 'a collection of absurdities' and the Post 'malicious,' but the facts are on the record, unchallenged by contrary evidence." - Ben Bradlee [9]

Clarity:
By unraveling the complicated details of Watergate in a manner in which the public easily access, these reporters achieved clarity. Although Woodward and Bernstein should not have broken the law, their investigation was a large step forward for democracy and truth in America and ultimately outweighs the sometimes morally unacceptable strategies they used. [10]
Footnotes: